The following excerpt is taken from the book Resorts of Minnesota by Neil E. Johnson with Adam Swenson.

The beach is rockin! There are dozens of sun chairs loaded with bathers soaking up rays. People are cannonballing off the Hive’s water tower (a sixty year old tradition), squirt gun wars are in full swing with kids jumping on the water trampoline, and jet skis are zooming by. 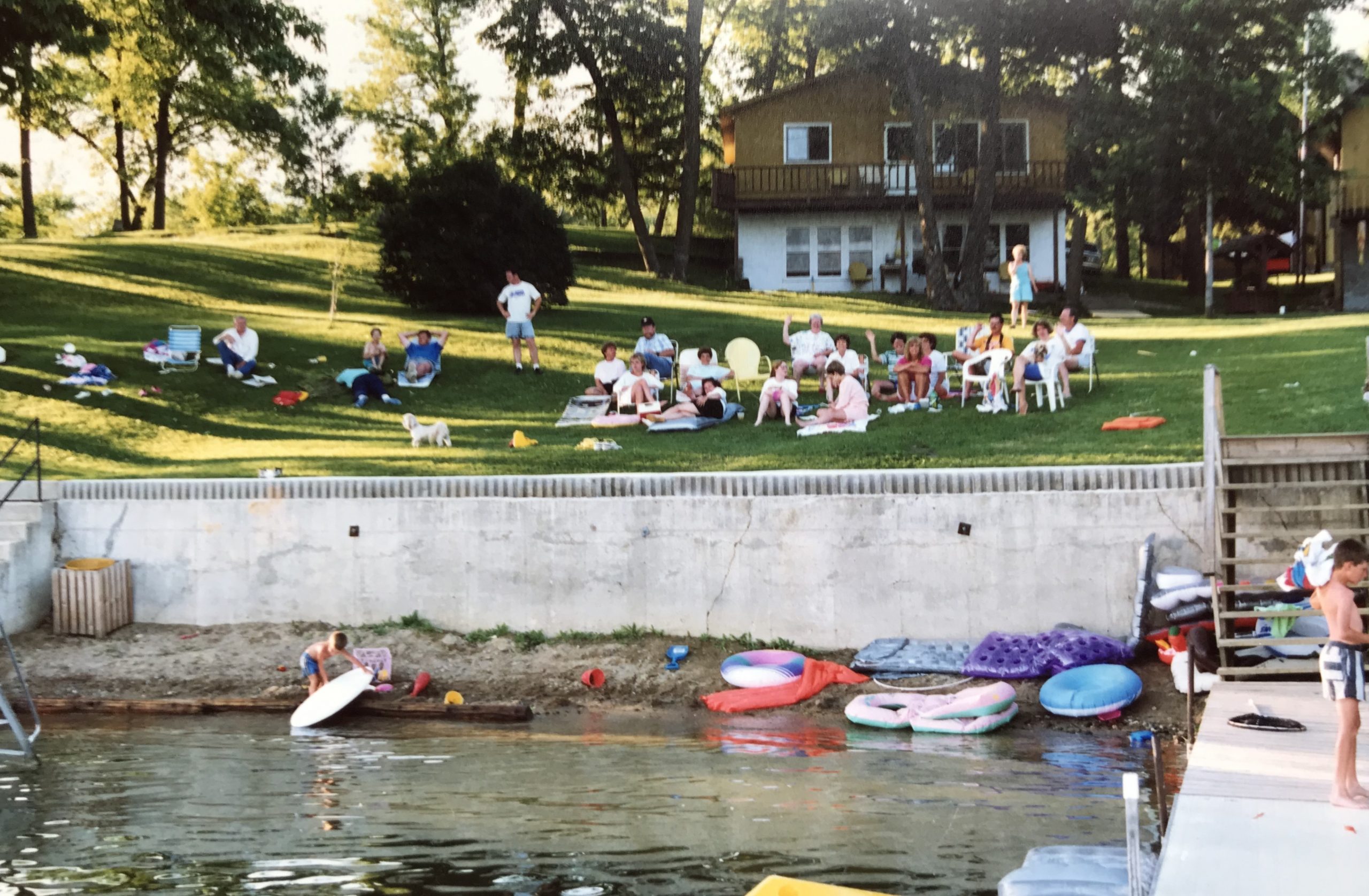 Sitting in his home atop the hill, Jack Bugbee still puzzles in amazement at the spectacle below, wondering how it all happened. “My parents didn’t buy this place to get in to the tourism business,” Jack Bugbee flatly declares. “I’ve wondered how many times what possessed my father to buy this property. I have my ideas – I think there was a competitive spirit in play when his friend bought the piece of ground that became Stonegate Lodge – but I will never completely know.” 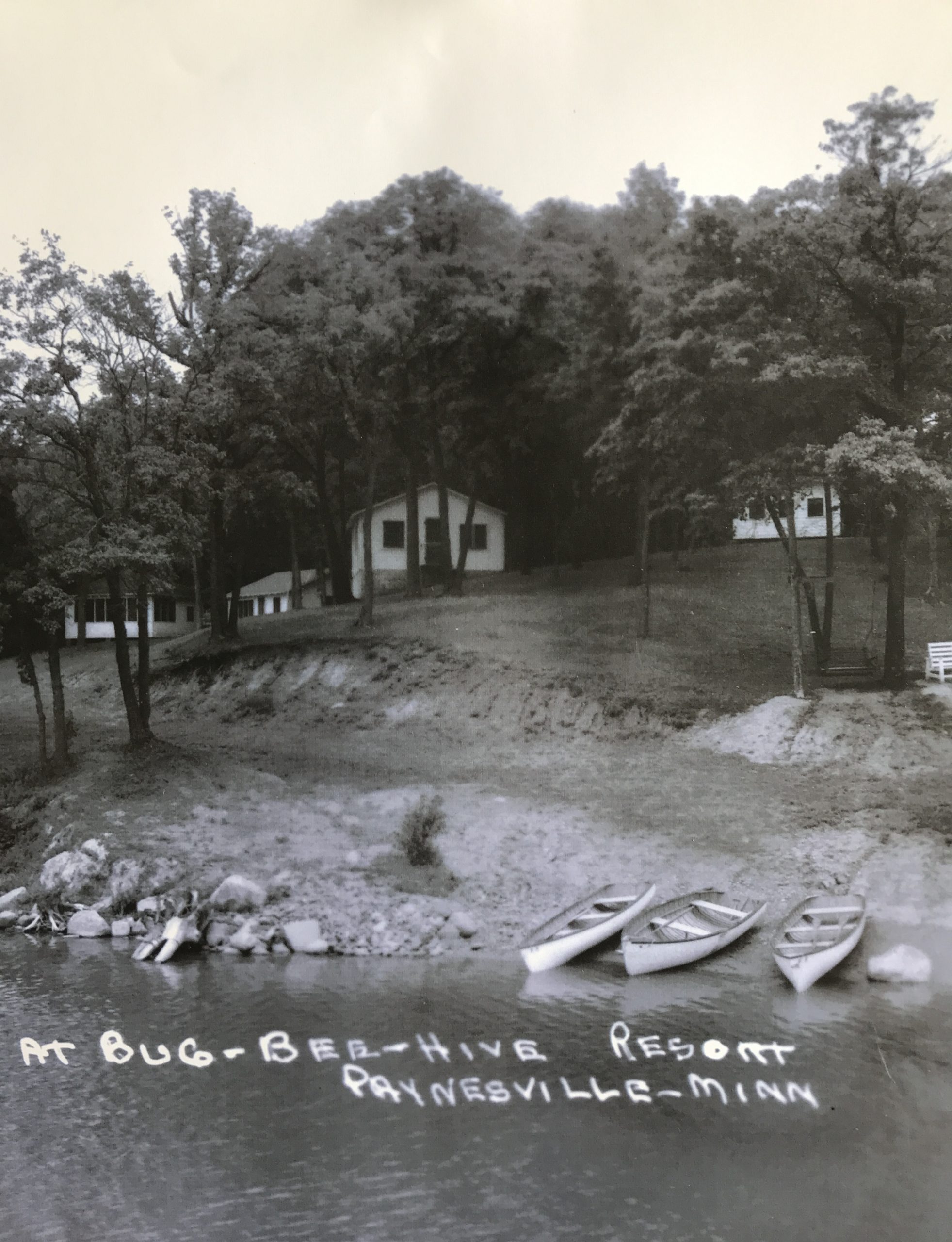 It’s been ninety years since this father, William (better known as Bill), purchased the land, and no amount of wondering will change the end result.

One thing is for certain: when Bill purchased the sixty acres in 1920, he was still broken-hearted from the loss of two loved ones. His first wife, Mable, died giving birth to his daughter, Virginia, in 1917. Just two years later this father, Albert, died from a freak accident.

The accident occurred outside the drug store in Paynesville around 6:00 on a bitterly cold evening. Walking down the street with the collar of his sheepskin coat pulled high around the ears. Albert was unable to hear the commotion behind him and the wagon master couldn’t stop the runaway horses; Albert was trampled.

In the wake of these tragedies Bill got remarried to a woman named Mary. Looking to move on, he bought the property. The first cottage went up in the early ‘20’s. Named the Honey Bee, it was built for Bill’s mom, Janet. After that another cottage went up for other family members. To build a third unit, Bill borrowed money from his friend, the sheriff of Stearns County, Art McIntee. The Schmatlan family from Skylar, Nebraska rented that unit for whole summer season. In the late ‘20s other cottages were erected that would be rented out to even more summer guests.

With the birth of his son, William Jr. (better known as Jack), and the additional income, things were looking up for Bill. Still he was consumed with putting up more cottages. Eventually there six units on the property and families from Nebraska, Missouri, and Kansas filled them while trying to escape the summer heat of the more southern states.  Guests of BugBee Hive Resort during the ‘20s came by rail or by car to Paynesville and finished the trek to the resort via an oxcart path.

When the depression hit, Bill lost his job at North American Creameries of Paynesville. Still down from the deaths of loved ones years ago, the prospect of losing everything he had worked so hard for was too much for Bill. Depressed, he turned to the bottle a little too often for Mary, the daughter of an Episcopalian minister. They divorced ad split the property down the middle, with Mary retaining the cabins.

By the grace of God, Mary was able to keep enough summer guests coming back through the depression to keep the property. Jack devoted many hours to helping his mom with their little operation until he graduated high school in 1941. From there Jack went out to California for summer school and then to Macalester College, but with the world at war, was cut short. 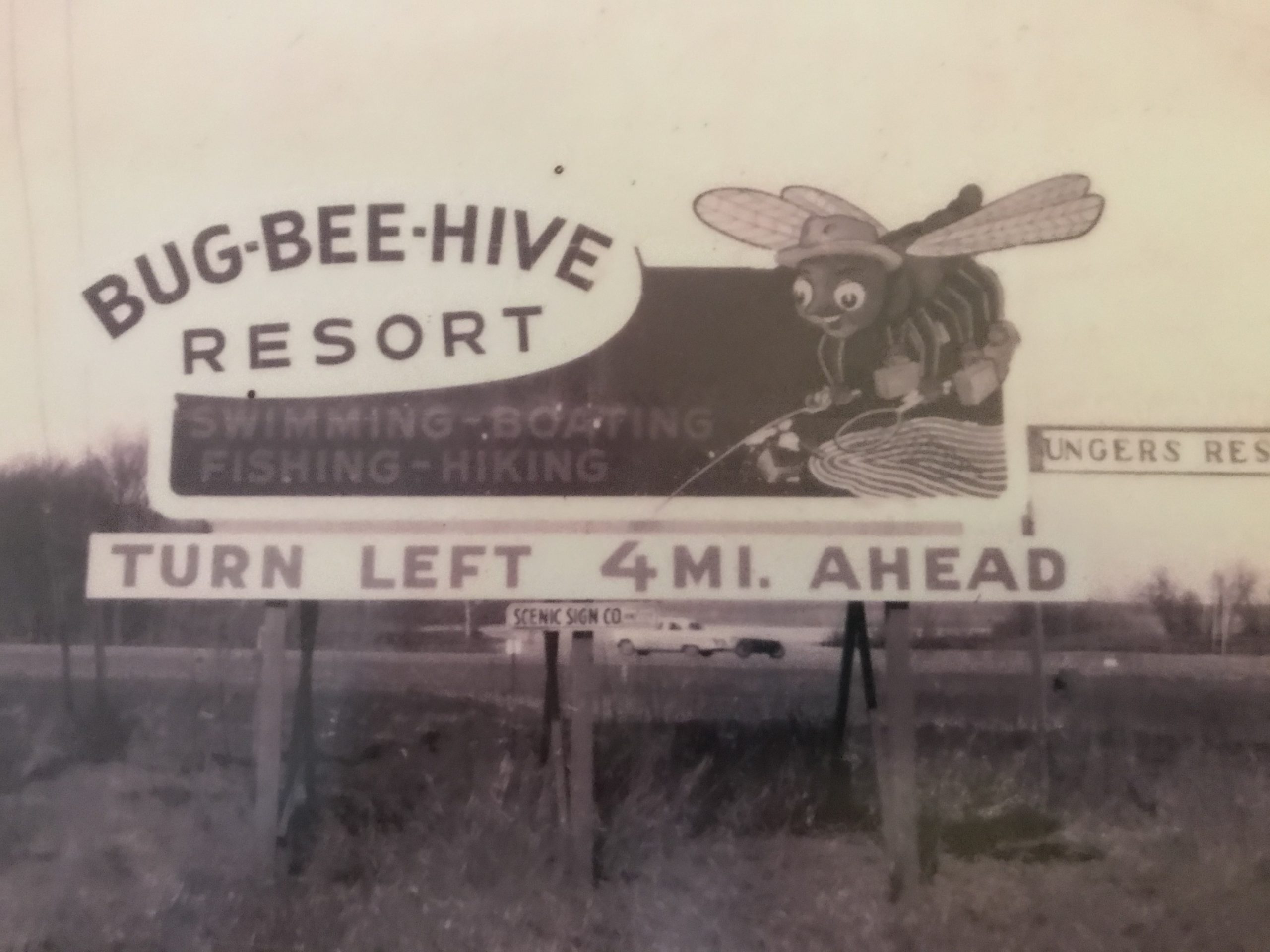 In 1943 Jack enlisted in the Navy and went off to Green Castle, Indiana as an aviation cadet and then to Terre Haute, Indiana to flight training school, eventually winding up in Lakehurst, New Jersey. “I was a flight trainer,” he said. “We taught the boys how to go home.”

Wistful, he thinks back on Bug-Bee Hive. “Back at home mother was just trying to hang onto the land and the six cabins. When I finally made it back to her after being discharged in April of ’46. I bought into the resort by borrowing $10,000, using the GI Bill. During 1947 I used that money to build four new cabins: Sea Bee, Bay Bee, Drone, and the Crazy Bee. We called it the Crazy Bee, because by the time we were finishing it everyone was going crazy trying to get it done. I stayed up all night before the first guests arrived to finish the work.”

In 1948, Jack married the love of his life, Audrey, against her mother’s advice: “Don’t marry him. They just want you to clean cottages!” Jack still marvels at his wife of sixty-three years. “We had five children. How my wife could handle it all and run the resort, I still don’t know.”

Jack always had another job outside of the resort, sometime two. He sold real estate, worked at a bank, and both he and Audrey drove school bus for a time. His longest stints on the job were as a circulation manager for the Star Tribune from 1950 to 1960 and working for the postal service as a rural mail carrier from 1962 – 1986. Jack and Audrey had their children during the Star Tribune years: Bruce was born in 1950, Mary in 1952, the twins, Paul and Peter came along in 1954, and John in 1958.

Things got so tight during the ‘60’s and ‘70’s that, with the bank on his back, Jack had to sell of six cottages. Paul still remembers going to some of the closings with his dad and asking him, “How can you sell these cottages?” Jack would reply, “It’s like cutting off a limb.”

Paul graduated from UMD in 1977 and leased BugBee Hive for a year from his parents. Jack was pushing him hard to get another job, which he did. Paul went to work for the American Heart Association as a field director, eventually becoming director of development for the state of Minnesota.

Not one to sit on his hands, Paul was always doing things independently as well. Back in college, Paul and his twin brother, Peter, couldn’t stand paying rent. With their father’s blessing they bought a home adjacent to campus and converted the tuck-under garage into an apartment. They lived in that and rented the home. The next year they bought another home using their student loan money while they worked jobs to pay their tuition. Eventually, Paul and Peter owned 112 rental units in or around St. Cloud; they went to their jobs by day and managed property at night.

Utilizing his drive and desire for continuous improvement Paul helped out at the resort every summer. Then in ’95 he left his fulltime job to manage the resort. The efforts were not lost on his father, Jack, who sold the resort to Paul in 2000.

Paul never looked back. He immediately began constructing new cottages with the support of his wife, Kella, whom he married in September of 1999. Paul also realized that for the resort to be viable he needed to capitalize on some winter business: currently all but one of the cottages is ready for winter use. Paul built some larger units along with a grand lodge which houses a swimming pool and a catering kitchen. This gives them the ability to host large family groups, corporate retreats, weddings and scrapbooking retreats. 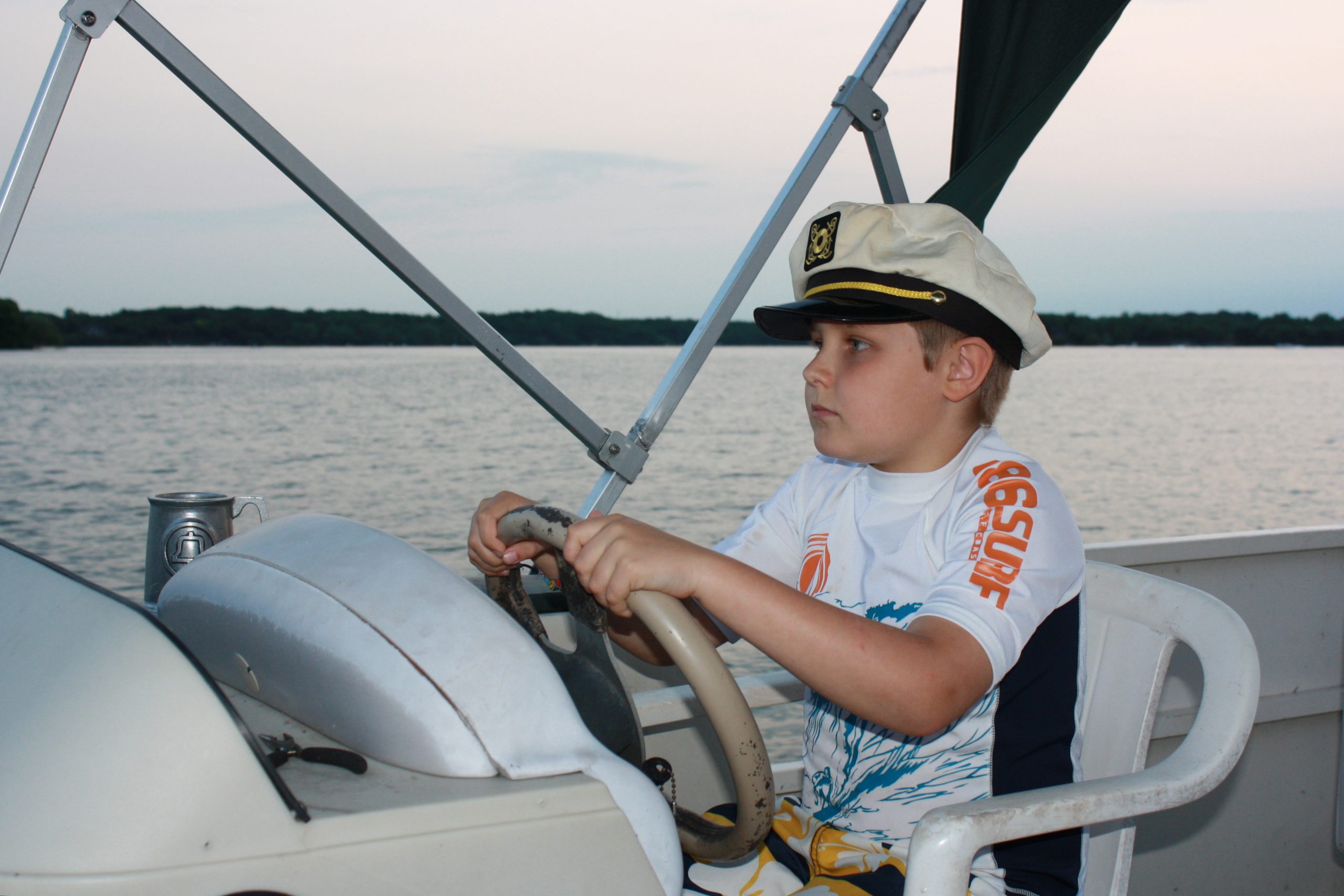 In 2004 Paul and Kella were blessed with a son, Benjamin, to add to their family of three (Kella had a daughter, Natalie, when she married Paul). When asked why he was the only sibling who took an interest in running the resort, Paul replied by saying “I was the only one crazy enough. The others couldn’t get out of here fast enough or far enough away… Being a resort owner is a chosen lifestyle. When I was gainfully employed I made twice the money in half the time. I have always believed that if you get to do what you love, you have achieved success. If you make any money, that’s the bonus.